Disclaimer: Experienced and licensed roofing professionals should perform all roof snow removal. All decisions about when and if to remove snow from a roof should be made in consultation with a structural engineer. This general information is intended to introduce building stakeholders to snow removal concepts and help them to understand what to expect from their roofing professional during snow removal.

In cold climates, a flat roof may collect several feet of snow over the winter. You should remove the snow from a flat roof because it can create many problems if left where it falls. Snow may block access to the building’s key features or even damage the roof drainage system or other parts of the roof by thawing and refreezing. There are many negative effects of unmanaged snow on your commercial roof, but you can avoid them. 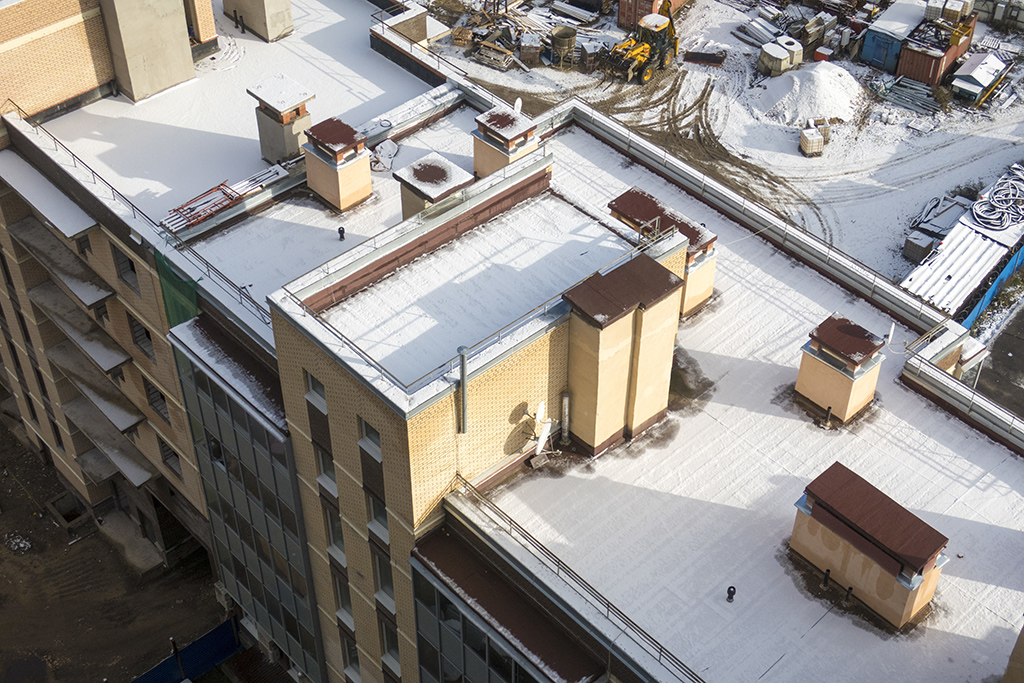 Building stakeholders can take many steps to mitigate their risk from snow build-up. Before the snow even falls, you can install snow protection features. Also, it will be helpful to create a snow removal plan before the snow falls by finding your building’s snow load, creating a roof map and familiarizing yourself with FEMA guidelines on when you should get snow removed from your flat roof.

While licensed professionals will perform the actual snow removal for you, we’ll explain what you can expect from them during the snow removal process, including safety measures they should take and considerations about where to store the snow.

Do You Always Need to Remove Snow from a Flat Roof?

Large amounts of snow build-up can affect a roof and the building beneath it negatively. Snow can cause damage to the building itself and cause safety hazards, which can open the building owner up to liability. Therefore, snow should be removed. However, it should be done with strategy and care, not indiscriminately.

The decision of whether or not to remove snow from a flat roof is not as dire as some snow removal companies make it sound. As long as your roof meets your building codes and is in good condition, it will not collapse from a few inches of snow. In fact, according to the Federal Emergency Management Agency (FEMA), when snow accumulation is minor, it may be more of a risk to remove the snow than to leave it, as improper snow removal can result in damage to the roofing membranes. 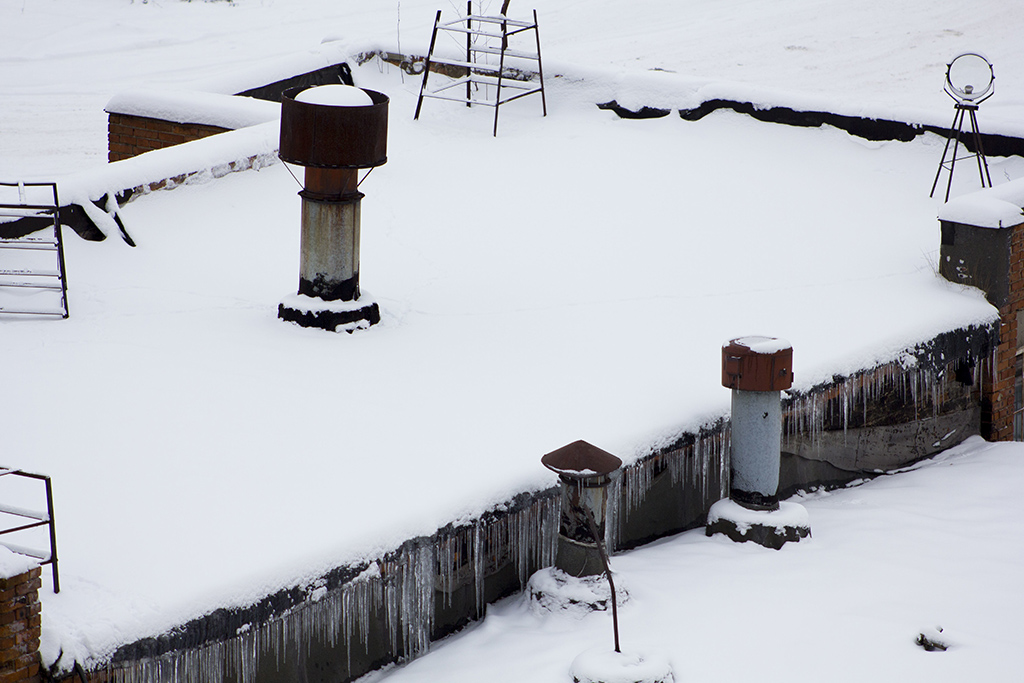 If you allow snow to build-up on your commercial flat roof, your building may suffer these negative effects: What is Flat Roof Snow Load?

Snow load is the weight of snow on the roof surface as used in designing the building. Snow load is a “live” load, and not a “dead” load, both because it is not a permanent fixture of the building and because wind can move the snow and change its pressure on the building.

Calculating the weight of snow on a flat roof is complicated as many variables are involved, including the ground snow load, the roof shape, slope and thermal condition of the building. The construction drawings should list the building’s snow load, or an architect or structural engineer will be able to determine it for you. Then you can assess whether the weight snow on your roof is in danger of exceeding the snow load.

How Much Does Snow Weigh?

Unfortunately, the weight of snow is variable. Some snow will be quite light, with spread-out snowflakes and a low amount of moisture. At other times, snow will be very heavy, with compact snowflakes and a high amount of moisture. You have probably experienced the difference between these two snow types. It’s easy to make a snowman with heavy “packing” snow and next to impossible with the lightest snow. According to the Ontario Ministry of Labour, one cubic foot of snow may weigh from seven pounds to 30 pounds.

As snow weight is variable, calculating how much the snow weighs on your roof isn’t as simple as assuming five inches adds a certain amount of weight. To further complicate matters, snow that is rained on will increase in weight. If the snow melts and refreezes as ice it will weigh the same even though it takes up less room on the roof.

It is also important to note that one foot of snow on the ground doesn’t necessarily mean you have a foot of snow on the roof. Wind can add additional snow or remove some. Snow can slide off sloped surfaces or off one flat roof plane to a roof plane below. So, to determine how much snow is on the roof, you must monitor the roof itself, instead of relying on ground measurements.

You should also consider that the weight of the snow will not be dispersed evenly over the roof. Drifting snow, driven by wind, tends to collect on one side of roof features, depending on the direction of the wind. These areas are especially vulnerable and should be monitored more closely than other portions of the roof. Also, when removing snow, roofing professionals should remove snow from these areas first.

How Often do Roofs Collapse from Snow Weight?

Typically, a properly designed and installed roof will not collapse from small amounts of snow build-up, but vulnerabilities in the roof, extreme weather, poor design, poor roof maintenance, poor drainage and other unusual circumstances can cause a collapse. In particular, FEMA notes that older buildings that were not designed for adequate snow loads are more vulnerable to snow-induced structural failure.

Complete collapse isn’t the only risk of excess snow. High snow loads can cause deflections in structural supports, which may damage internal building features such as electrical conduits, gas lines, water piping, and more. It is important to have a plan to remove snow and monitor the condition of the roof to avoid partial collapse as well.

FEMA provides a list of signs that indicate a building may be too stressed by the snow load. These include:

If you discover any of these signs, it is not wise to step onto the roof, not even to remove the snow. Instead, the Ontario Ministry of Labour suggests that you refer to a professional engineer to create a snow removal plan that will not increase the odds the roof will collapse. For further guidance, the Ministry suggests people read the United States Department of Labor’s alert on removing snow from rooftops.

There are several steps you can take to reduce the risk snow poses to your roof and reduce the snow drifts on your flat roof. These include:

When Should Snow be Removed from a Commercial Flat Roof?

Also, if the snow load is light enough for the building, but is at risk of melting and refreezing, it should be removed. Temperatures do not need to drop below the freezing point for snow to melt. Exposure to direct sunlight can melt the top layer of snow. Overnight, this water will refreeze and make the snow much more challenging to remove.

Before winter arrives, determine at what weight and during which weather conditions you intend to remove snow from your roof, so that you can share the plan with your roofer and refer to the plan yourself throughout the winter.

Why Choose a Professional Roofer for Snow Removal?

Once you’ve made the decision to remove snow from your roof, you should choose a licensed roofing contractor to perform the task for you. The roofer will understand how to stay safe on a snowy or icy roof surface and how to avoid damaging your roofing membranes. It is also wise to choose and hire a snow removal professional before winter arrives, as you may be unable to find one who is free once the snow begins to fall. 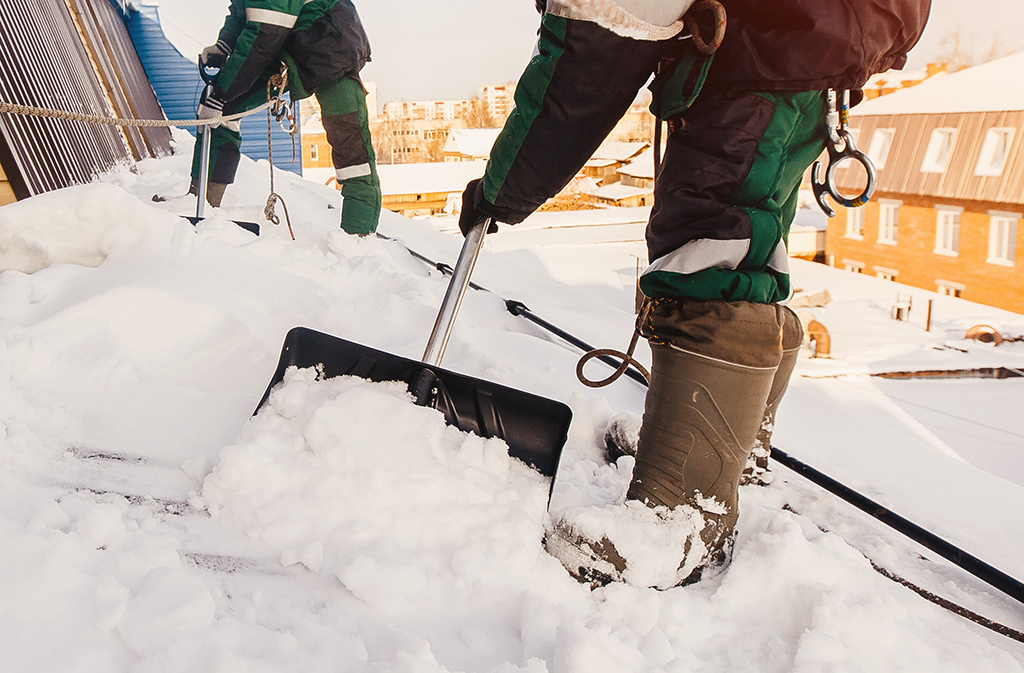 If you understand how a roofer should be removing snow, then you can be proactive about protecting your building and ensuring snow has been removed properly. We’ll outline what you should expect from a professional roofer during snow removal below.

How to Remove Snow from a Flat Roof

Step One: Plan for Removal

Snowfall may hide or obscure roof features that are usually visible. Refer to your plan and your map of roof and have the roofers place flags or other markers to indicate roof features such as skylights, vents and HVAC equipment. These markers will help the roofers stay safe and avoid harming these features as they remove the snow.

Snow should not be piled on the roof even temporarily. Therefore, the roofers must designate spots on the ground to hold snow. Typically, they will choose spots that are far from entrances and exits, fire escapes and other building features. If your roof is very large, you may need to move the snow off-site.

There are many safety regulations and rules surrounding working in the cold at the local and national levels. You should make sure you are aware of these regulations and that you’re following them. You can start your search with the Canadian Centre for Occupational Health and Safety and the organization’s requirements for working in the cold. Roofers may need a travel restraint harness or other fall protection. They should also take their breaks in a warm area, which may (or may not) be the building itself. Following these national regulations may not be enough, be sure to explore your provincial and municipal safety requirements.

Bringing their equipment onto the roof is relatively simple in this case as roofers should only be using plastic shovels on flat roofs. Shovels with metal tips and mechanical snow removal equipment may damage roofing materials and roof features.

Also, be sure that the roofing professionals always keep the roof access point clear during the snow removal.

First, roofers should remove the snow that has piled from the wind, such as behind HVAC equipment or on lower roof planes. It is best to relieve stress from these critical areas first.

Professionals may gather snow on tarps or in containers and then have a crane or other lifting equipment remove the tarp or the container from the roof.

If the roofers are dumping the snow off the tarp at the edge of a roof, they should first ensure no one has access to the dumping spot. Also, snow typically must be moved from this spot to a safe, permanent location where it is out of the way of those who use the building.

Now the roofers will remove the rest of the snow from the roof. Typically, they will divide the roof into sections and work on each, dumping the snow when the section is finished.

Any roofing work should finish with an inspection and snow removal is no different. If a roofer has accidentally damaged the roofing membrane it is best to know now so that the roofer can fix it as soon as possible.

The Importance of Snow Removal from a Commercial Roof

All building stakeholders should be familiar with your building’s snow removal plan. Preemptive measures such as fall roof inspections and installing wind baffles will help ensure your commercial flat roof handles the winter season well. Ultimately, you’ll rely on the speed and quality of professional snow removal services to care for your roof and, therefore the rest of your building. Reach out to a professional commercial roofer before the snow starts to fall.