An asphalt shingle roof is a valuable part of your home. It shields you, your family and your possessions from the elements. But many homeowners don’t know much about shingles, and, in fact, very few homeowners ever touch or handle an asphalt shingle. In many ways, shingles are a bit of a mystery material. So, in this age of instant information access, IKO shares the following sampling of answers to some interesting homeowner questions.

I see some lumber store ads that call the shingles “asphalt shingles,” and other dealers’ ads call them “fiberglass shingles.” Are they the same? OK, I know they’re called asphalt shingles, but how much asphalt is in there?

That’s a great question, and it can make a difference in the overall quality of the shingle. Industry standards prescribe a certain minimum weight of asphalt which is important for adhering the granules to the shingle for weather resistance and for long-term roof performance. Typically, around 20 percent of the product weight is asphalt (by comparison, the asphalt content in asphalt road pavement is typically down around 6 percent). Lighter weight shingles may contain less asphalt than heavier shingles, so be careful when comparing different brands.

I heard that shingles were once made with asbestos. Is that true?

That’s partly correct. In North America, fire safety codes have dictated for decades that building materials used on the exterior of the home, including roofing materials, should have a certain level of fire resistance. Note that Underwriters Laboratories has had a fire-resistance test for roof coverings, including shingles, since 1958. Many years ago, some shingle manufacturers promoted fire-resistant roofing materials that were made using asbestos fibers within the shingles’ reinforcement. However, shingles containing asbestos were phased out in the 1960s, and asphalt shingles were made fire-resistant using safer, inert mineral stabilizers. IKO has never used asbestos in any shingles. After my new roof was installed, and we had a big storm, I saw some of the tiny colored stones from the shingles at the bottom of my downspout. Should I be concerned?

During the manufacturing process, the asphalt roofing sheet is literally flooded with those small colored roofing granules to ensure as many as possible will adhere to, and therefore cover, the sheet. Not all of the granules can stick; most of those are reclaimed and reused in the process. There are always a few extra granules that hitchhike on the surface of the shingles. Once the shingles are installed, it is absolutely normal for these extra granules to weather off. If you’re concerned, ask a roofer to check the shingles themselves to make sure there is still good granule coverage.

My roofer used a nail gun to install my new shingles. Is that just as good as hand-nailing with a hammer?

This is another good question that is often asked. In the early days of pneumatic shingle attachment, staples were used. Staples were more prone to crooked or cocked installation, and therefore could result in a roof system with reduced wind resistance. Pneumatic equipment subsequently received a bit of a bad rep. However, current equipment uses essentially the same roofing nail geometry as hand-nailed nails. As long as the contractor takes care to ensure that the nails are in the correct location on the shingle and that they’re installed flush with the shingle surface and not over-driven, either method can provide a suitably finished roof. 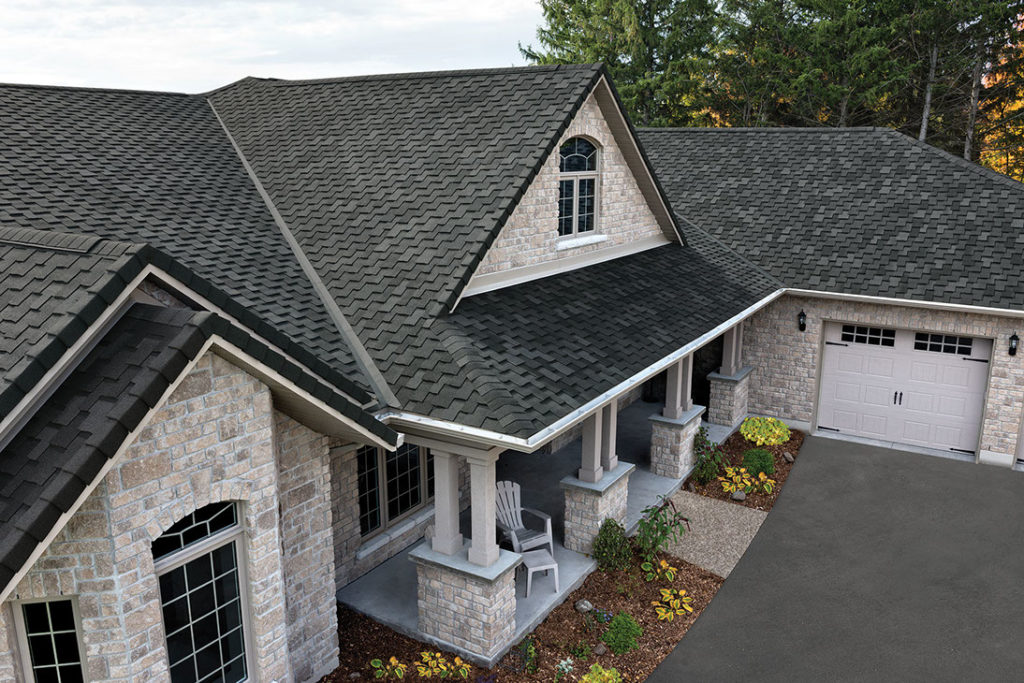 How long will it take for the shingles on my new roof to seal?

The sealant on shingles doesn’t work like a peel-and-stick material. The installed shingles need to receive sufficient solar warmth for the sealant to be activated. Of course, the length of time that takes depends on many factors, including the home’s location, the roof direction, the roof slope and climate conditions, so an exact time duration can’t be given. The good news is we know that shingles generally do eventually seal. This is evidenced by their widespread popularity, due in large part to their sealant system’s effectiveness in providing good wind resistance. IKO’s shingles are made with IKO’s own FastLock® sealant. When activated by the sun’s heat, it gets extra tacky and creates a strong bond to help ensure maximum protection against wind uplift, blow-off and water penetration.

When we shingled my cousin’s cottage, my uncle said in the old days they had to remove the tape off each shingle to expose the sealant. Does that have to be done on current shingles?

This is absolutely not required. It’s amazing how this notion still survives. However, there are a few reasons why some people think the release tape on the back of the shingle needs to be peeled off. (The release tape serves only to keep the shingles from sticking together in the package and serves no adhesive function.) For one thing, the asphalt under the release film looks shiny. Many people assume it’s an adhesive strip; but that shiny asphalt is merely the shingle’s coating asphalt.

Originally, asphalt shingles did not have a sealant strip, and they were manually sealed with adhesives after installation. “Self-sealing” shingles were introduced in the late 1950s. The early versions actually had a tape or film covering the sealant and that film had to be removed. Here’s an excerpt from a self-sealing shingle patent from around 1961:

“… if the tape is applied overlying the adhesive stripe on the upper surface, it is necessary to pull off the tape at the time the shingles are being applied, to expose the solar-heat-softening adhesive so that it can function to seal the tabs.”

Shortly after introducing self-sealing shingles, manufacturers determined that the release film could be placed on the back of the shingle and, in that location, would not need to be removed. This accelerated shingle installation. See this industry bulletin for additional information. 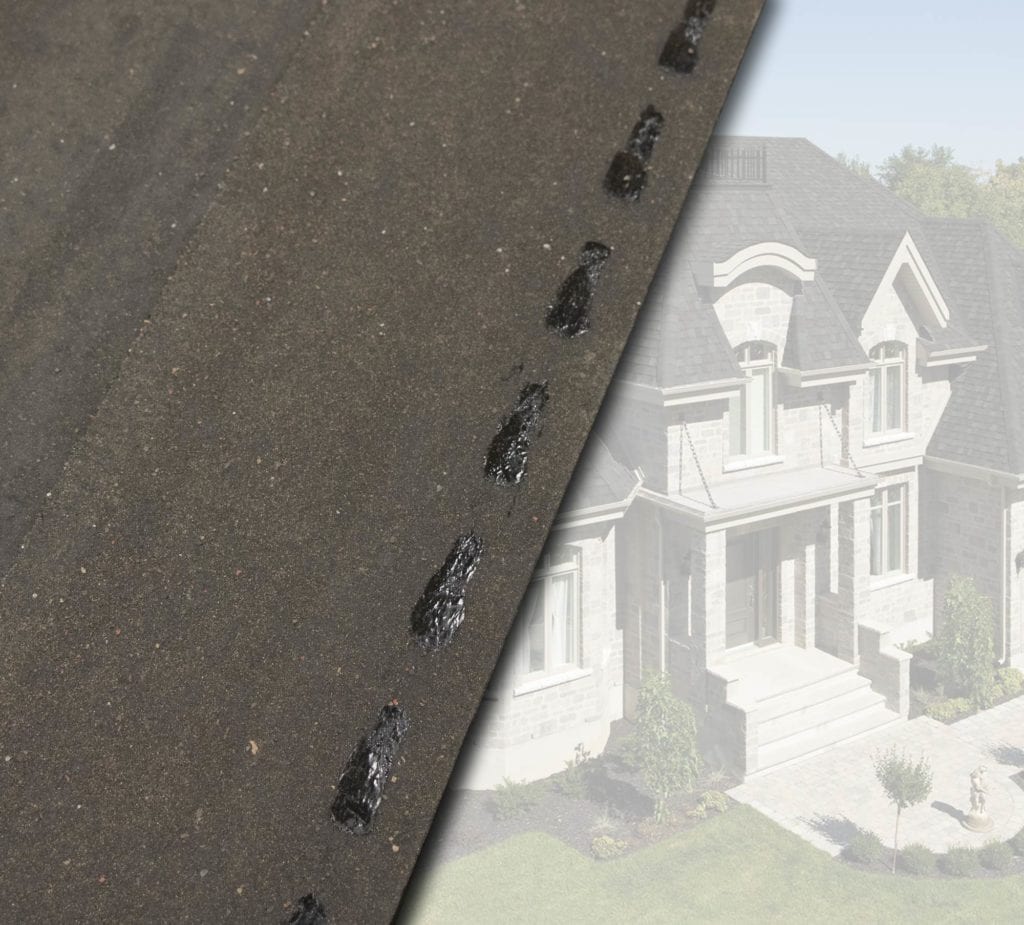 Once the shingles have all been installed and sealed together, won’t it be impossible to make any roof repairs down the road?

Although the sealant, when fully activated, does a good job of sealing the shingles together, it is possible to carefully separate the bond with a flat bar. This is best done in cooler weather. Once the bond has been separated, the nails can be removed, and any shingle adjustments can be made. Afterward, any lifted shingles should be manually resealed with asphalt plastic cement.

It seems like every roof in my neighborhood has laminated shingles on it. Why are they so popular?

You’re right! Laminated shingles are the most popular shingle style today for two main reasons. Contractors like the way they’re installed because their random appearance means that shingle alignment is simpler than that of traditional three-tab shingles. But the main reason is that homeowners like the depth and texture of the two-layer laminated shingle look. Laminated shingles, such as those in IKO’s popular Cambridge® line, also feature shadow bands, and Dynasty® shingles offer highly contrasting color blends to give roofs a more dramatic impact. Is it true that my home cooling costs will be higher if I choose dark-colored shingles for my roof?

While it is true that darker-colored shingles will get warmer than lighter-colored shingles on sunny days, this does not necessarily translate directly to higher home cooling costs. Many homes are constructed with an attic, with an insulation layer on the floor of that attic. As well, typically attic spaces are thoroughly vented, which also reduces heat transfer from the roof surface to your home’s living space. For homes with this traditional construction style, the temperature of the shingle surface has little to no direct effect on your home’s air conditioning use. However, in some regions the home’s HVAC system may be installed in a compact attic space, with less insulation, and less attic ventilation. In these cases, a lighter roof color will likely help reduce home cooling costs. IKO’s Cambridge Cool Colors line of shingles offers a reflective, lighter-colored shingle option for homeowners.

Homeowners and roofing professionals should be careful about believing everything posted about asphalt shingles.

Many misconceptions and myths exist based on outdated or inaccurate assumptions. Trust IKO for accurate and helpful information on asphalt shingle roofs!