What is the difference between a hip roof and a gable roof? You may want to know as you consider what type of roof you should put on your home extension, gazebo or detached garage. Or, perhaps you’re starting your home search and want to know which type of roof is better for your area. 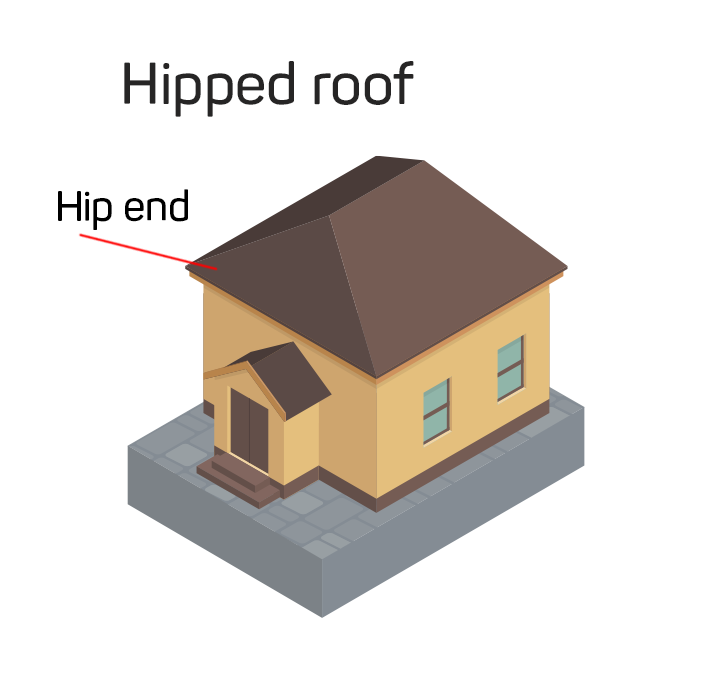 Both hip roofs and gable roofs can be incorporated into modern and historical architectural styles. Each also has unique benefits. Which you should choose is a complicated question. Much depends on:

We’ll explain what these roofs look like, their benefits and disadvantages, as well as other details that can help you make your decision.

What is a Hip Roof?

A hip roof is a roof where all four sides of the roof slope downwards from the peak. It does not have a gable or a flat end. Hip roofs are popular on church steeples, where they typically have a high pitch. They’re also popular on houses in the suburbs, because they are easy to build. The walls beneath the roof are all the same height, which makes for simple construction.

The hip of a roof is the point where two roof planes meet and project outward. See the image below, which features a hip roof with prominent hips. There are several types or styles of hip roofs: What is a Gable Roof?

A gable roof has at least one flat end called a “gable.” This triangular end is not composed of roof materials. Instead it is made of siding, stone or whatever materials are used on the rest of the home’s exterior. A gable roof can have one, two or more gables. Gable roofs are most common in cold climates. They are the traditional roof style of New England and the east coast of Canada. Fans of literature in both countries will recognize the roof style from popular novels. Nathaniel Hawthorne’s “The House of Seven Gables” and Lucy Maud Montgomery’s “Anne of Green Gables” both reference this roof style in their titles.

There are several types of gable roofs: Can a Roof Have Hips and Gables?

Yes, many roof styles include both hips and gables. 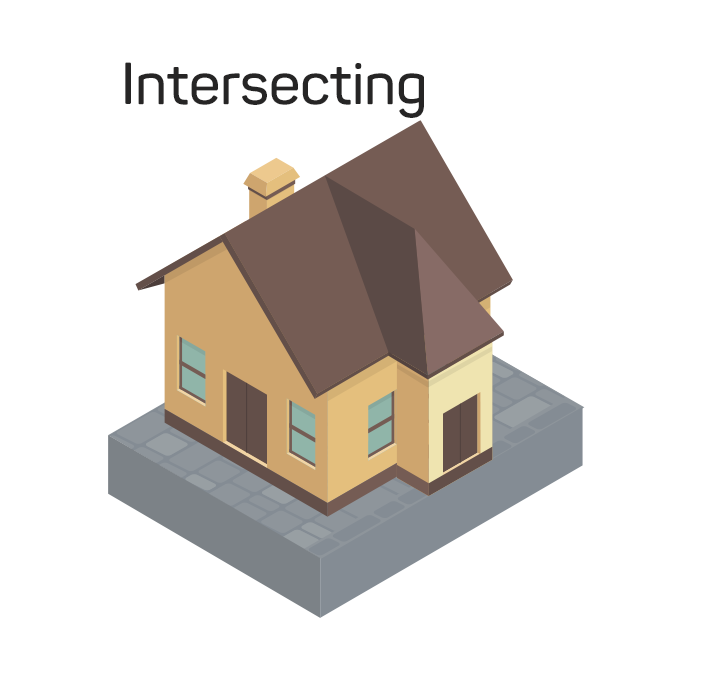 These roofs styles may combine the advantages and disadvantages of both hip and gable roofs.

This chart shows you the major differences between hip roofs and gable roofs at a glance. Afterwards, we explore each of these advantages and disadvantages in detail.

Hips roofs are a solid choice for high winds. Research has confirmed that hip roofs deal with even extreme winds better than gable roofs. When tested in a wind tunnel, roofs with four hips and a square footprint performed best. They require less diagonal bracing than gable roofs and don’t have a flat face where wind can catch. As a result, hip roofs may be a better choice for you if your home faces high wind conditions. As hipped roofs have much better wind performance, some insurance companies give homeowners who live in areas that experience hurricanes a discount on their insurance for having a hip roof. The discount could be as much as 32%.

Usually, you can expect this discount in areas that experience hurricanes and high winds, such as Florida. It’s wise to confirm this discount with your insurance provider before you choose a hip roof. If your home is already built, you can have a wind mitigation report completed to assess whether your home qualifies for the discount.

From a builder’s perspective, hip roofs are easier to construct. All walls are the same height and there’s no need to put on the additional bracing a gable roof requires. Although, some builders will still prefer gable roofs even though they are more challenging to build, as they are also less expensive.

As they usually have a lower pitch than gable roofs, hip roofs may not be as good at shedding snow. All roofs need to be built to code, but it may be more challenging to design a hip roof to your building code’s snow load standards.

This cold weather performance may explain why gable roofs are more popular than hip roofs in snowy areas. That being said, architects can design hip roofs that have proper winter performance. Plus, you should protect your hip roof with ice and water protector to limit the effect of snowy weather.

Hip roofs also have less attic space than gable roofs because they require diagonal bracing that takes up space. In contrast, a gable provides a vaulted ceiling and additional space. However, you can include dormers on hip roofs to provide extra space and natural light to make up for the lack of a gable.

Ventilating your attic is key to keeping your home and roof in good condition. Proper vents will allow excess moisture to escape. A gable roof can be outfitted with gable vents, which can help you reduce humidity and keep your home healthy.

Opinions are split on the effectiveness of gable vents. A gable vent can be very helpful in garages, where you may need extra ventilation for health and safety. However, most homes will need more than a gable vent in order to properly vent excess moisture. While choosing a gable roof for ventilation benefits may be smart in some circumstances, it’s not necessary. Ridge and soffit vents can provide adequate ventilation for any type of roof, so long as they are installed properly by an experienced professional.

Gable roofs provide a larger space for your attic. Some people want to put spare bedrooms or kid’s play areas in the attic. After all, otherwise it’s just wasted space.

While both hip roofs and gable roofs can be used to create beautiful architectural styles, gable roofs have more room for decor. You can install gable brackets, pediments and other ornaments to enhance your roof’s good looks. Gable decor is available in a range of materials and styles, from simple and modern, to intricate and old-fashioned. Gable roofs do not perform as well as hip roofs during extreme wind. The gable is a flat surface that wind may hit directly. The wind is then pushed up the face of the gable to the roof. If there is an overhang on your gable, the force of the wind could, in extreme cases, pull up the truss of your roof.

Most professionals recommend keeping a roof overhang under 30 inches in areas where wind performance is a concern. However, refer to your architect. He/she will have a better idea of how to build for your specific conditions and building codes.

Homebuilders find that homes with gable roofs are harder to construct. The walls must be different heights to account for the roof shape. Plus, a gable roof may need additional brackets in order to boost its wind resistance, which takes time and skill to install.

Still deciding between a gable roof and a hip roof for your garage? Consider the popular reverse gable garage.

It is simply a gable garage but turned to the side, so that the garage doors are on the side of the building that doesn’t have a gable. See the picture below for reference.

You’ll notice that this garage is much wider than it is long. This gives you enough room for a garage door (or two), without having to build a massive garage. Plus, as this is a gable garage, there’s more room overhead for storage than there would be in a hip roof garage.

While you may read that you don’t need gutters for a reverse gable garage, this isn’t true. You’ll get much more use out of your garage and it’s shingles by installing and maintaining the gutters. Thankfully, the extra width on a reverse gable garage also means that the downspouts are further away from the driveway than they would be otherwise. Thus, homeowners have more room to direct the downspouts away from the driveway.

The type of roof you put on your garage isn’t the only important decision you’ll make. It’s also key to choose the right shingles for your garage.

The Final Word on Comparing Hip Roofs vs. Gable Roofs

It may be a challenge to choose the right roof for your garage, home, or even your gazebo. Should you put climate conditions, beauty, or cost first? It’s wise to work with an architect or a builder who can help you balance your needs. He/she can create a unique roof design for you that combines hips and gables, or help you choose a traditional roof type that works best for you.

Once you’ve selected the right roof type, it’s important to install the right shingles on it, for both performance and style. Your next step is to learn about the types of shingles and decide which fits your new roof best.