Why is a Roof Cricket Recommended for Chimneys?

Why is a Roof Cricket Recommended for Chimneys?

Chimneys are a vulnerable area of the roof, as they run through the whole roof into the living space below. It takes careful flashing to properly protect a chimney, including a roof cricket or roof saddle. While not all building codes require chimney crickets, most professional roofers you speak with will strongly recommend them. Why is a roof cricket recommended for chimneys?

We’ll explain what a roof cricket or saddle does, approximately how much one will cost you and how your roofer should install it.

What is a Roof Cricket?

A roof cricket is a sloped backing that diverts water away from the chimney and down the roof. A roofer builds a roof cricket out of wood and then adds metal flashing or asphalt shingles on top. During installation, the roofer incorporates the chimney cricket into the chimney flashing system.

You may also hear crickets referred to as chimney saddles or chimney diverters. How Does a Roof Cricket Work?

Without a chimney saddle, water would run down the slope of the roof and hit the back wall of the chimney. It would drain off the sides, but not quickly enough. You’d end up with a pool of water behind the chimney that could wear away at its masonry. This water exposure is especially a problem for historic homes, as the exact chimney materials may no longer be available for repairs.

A well-designed cricket will prevent this water back-log from developing. As the water reaches the cricket it is pushed to either side and away from the chimney, down the roof.

It’s important that the chimney saddle has a high enough slope that water never reaches its peak. Typically, to accomplish this a chimney saddle must be set at a higher pitch than the roof plane it is installed on. We’ll talk more about what slope and height your chimney cricket should be, according to international guidelines and your specific building codes, below.

How Did a Roof Cricket Get Its Name?

Cricket seems like an odd name to give this roof feature. By all accounts, the origin of the word roof cricket is a mystery. The Oxford English Dictionary does not mention a roof cricket among its various meanings of cricket, which may indicate that it is only called such in North America. The leading North American dictionary, Merriam-Webster, also does not mention it, although Dictionary.com does.

There is a myth that a character from the Disney movie “Pinocchio” (1940), Jiminy Cricket’s name is a play on “chimney cricket,” but this isn’t true. Other Disney movies use the phrase as a euphemism (or minced oath) for “Jesus Christ.”

It has also been suggested that the term chimney cricket could come from another meaning for cricket as a low stool. The idea is that roofers sat on the chimney cricket when taking a break from work, but we find that rather unlikely. It’s not a wise idea to sit on any roof feature.

In the end, we’re not sure how a roof cricket got its name here in North America.

Not all building codes in North America require you to install a chimney cricket. However, most specify that you need a roof saddle if you have a chimney that is wider than 30 inches. Note that you should measure the width of a chimney on the side that is parallel to the ridge. This is the side that is at risk from pooling water.

In building codes that require chimney crickets, there is typically an exception. A chimney that intersects the ridge does not need a roof cricket, as it will not suffer a build-up of water.

Your codes may also have requirements about how high your roof cricket must extend up the chimney. The higher your saddle must extend, the steeper its pitch will be. The steeper your roof, the steeper the cricket will need to be in order to divert the water properly.

Do Cricket Valleys Need to Match the Slope of the Roof?

Cricket valleys should match or exceed the slope of the roof. However, building codes typically refer to the height of the chimney cricket, not its slope.

The 2015 International Residential Code has guidelines about how high a cricket should extend up the chimney based on the slope of the roof. You can use these as guidelines if your building code doesn’t specify cricket height. However, if it does, follow your code’s guidelines.

Measure your roof slope and then refer to the chart below to determine how high your cricket should extend.

What Should a Roof Cricket Cost?

You should not attempt DIY roofing, including a cricket installation. Simply purchase a roof cricket through the professional roofer you’ve chosen to install it. Most home improvement stores will not carry the wooden skeleton of a roof saddle as most roofers simply make it custom for their clients.

The cost of your roof cricket installation will vary depending on your location. Expect to pay at least $100 for the chimney cricket itself, and more for its flashing or shingles. Then you must factor in extra cost for the roofer’s time.

Typically, the cost of a roof cricket will be included in the overall cost of re-flashing the chimney, which can vary widely depending on what your chimney needs, its size, and the flashing materials. While installing steel flashing may only cost a few hundred dollars, copper flashing will be much more expensive. 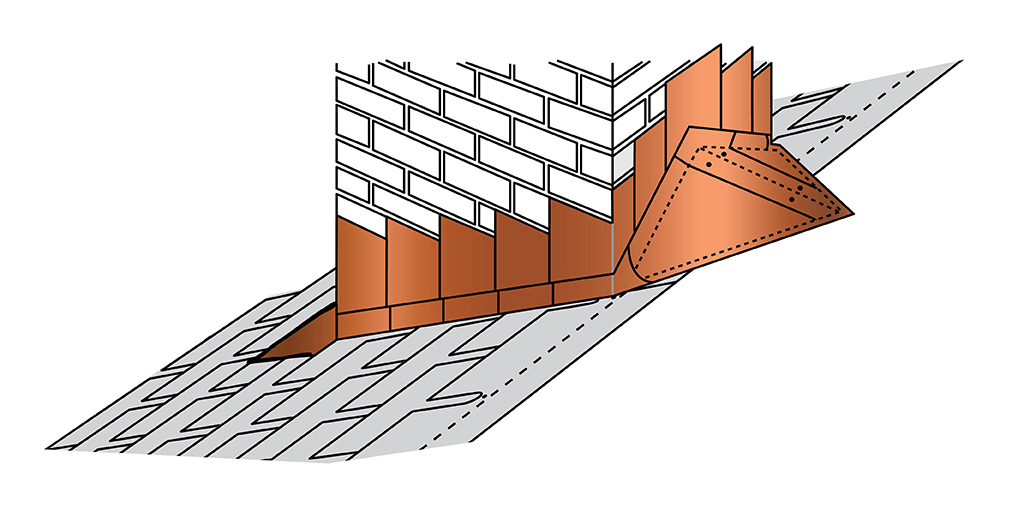 How to Build a Cricket on a Roof

Disclaimer: Roof crickets and other flashing should always be installed by professional roofers, who understand best practices, safety requirements and the building codes and laws in their area. These instructions are only to help homeowners understand what to expect from their roofing professional.

If you’re installing new flashing on a chimney without replacing the shingles on the whole roof, you’ll need to remove all of the layers of a roof around the chimney down to the decking. This includes the flashing and shingles. If you’re installing a new roof, start building the cricket frame before you install any underlayment.

Refer to your building code or the chart above to determine how high your cricket must reach up the chimney and up the roof slope away from the chimney. Measure and mark those locations on the center of the chimney wall and perpendicularly out to where the cricket ridge will attach to the roof deck. Cut a 2-by-4 to the appropriate length, to extend from the chimney wall, and parallel to level out to its anchor point on the roof deck. Cut the end of the 2-by-4 that sits on the roof deck at the corresponding deck slope angle, so it sits flush on the deck. Attach it to the deck with framing nails of sufficient length. You need to add two support beams to the cricket ridge. Each 2-by-4 should lay flay against the chimney face and extend all of the way out to the chimney sides to direct the water away. If they fall short of the sides of the chimney, water will hit the chimney.

Nail the supports to the ridge board you installed in the second step and to the roof decking—but not to the chimney itself. By not nailing the cricket to the chimney, you allow for differential movement. This movement prevents warping and reduces the potential for leaks.

Next, add sheathing or decking to cover the saddle frame. This thin wood will act as a support for the next layer of roofing material. Use miter cuts so that the boards align to one another perfectly, with no gaps. The entire saddle structure must be covered with ice and water protector. It should extend up the chimney as far as your flashing will. Add this underlayment as you add it elsewhere on the roof. How to Flash a Roof Cricket

If you’re installing metal flashing on your chimney saddle, this is the last step you’ll perform during the chimney flashing installation. You must first install base flashing, step flashing up both sides, and then slide the metal cover over the saddle. Nail it in place on the deck, and not on the chimney. Once the metal is in place, you must add a layer of ice and water protector on the top edge of the flashing, or the part of the flashing that is laying on the roof decking. Then you can continue with the rest of the shingle installation. Cut the shingles so that they fit neatly around (and on top of) the flashing. How to Shingle a Roof Cricket

Your building codes may allow you to install shingles onto the chimney cricket. However, it’s important to note that flashing is typically a better choice in this critical area. The cricket creates two valleys where water will drain, and IKO recommends metal valleys. Ideally, you’ll create a small overlap, where the shingle layer on the saddle extends beneath the shingles of the roof, so that water will run off the roof and onto the roof cricket without lifting up any shingles. Be sure to cut the shingles on the roof planes neatly so that they create straight lines down the center of both valleys.

How Important is a Chimney Cricket?

While a chimney cricket may not be mandatory in your area, or for your chimney, you should consider installing one anyway. There are many good reasons that chimney crickets are so strongly recommended by roofing professionals. The chimney is a vulnerable part of the roof and an important architectural feature on many homes. A chimney saddle is a critical part of chimney flashing that protects the chimney (and the rest of your home) from wear and leaks.

If your chimney needs a cricket, you can reach out to a local roofer through IKO’s Contractor Locator to have one installed.

NOTE: Not all products featured will be available in your area.